Senior Night is a time to honor our Senior athletes. Below are the words of Coach Susan Barry, reflecting on the time spent with her senior volleyball athletes from the Class of 2021, Makenzie Sparks, Jordan Christy, and Peyton Burnsed. Click here to see the Athletics Calendar and/or sport-specific calendars.

When I think of Mak, I think of hard work. When this young lady came to Habersham, she had not really had any formal training in volleyball but I knew she was athletic and thought, if she was willing to work at it, she could become a solid player. Well, what has become abundantly clear over the last 4 years is that Makenzie Sparks has proven to be one of the hardest working players I have coached. She has a wonderful work ethic and has made herself into a very good volleyball player. At this date in her career, she has 265 kills, 165 digs, and 47 blocks, and last year was named All-Region, All-Star, and All-Greater Savannah Honorable Mention, and she is also a two time State Champion. When you watch her play, you see that she never gives up on a play and is especially good at saving balls out of the net or off of opponents’ blocks. She is a very, very coachable player and a very supportive teammate and someone who has contributed greatly to the positive attitude this team has on the court. She is also a young lady who has shown a lot of personal growth in her 4 years at Habersham and she is someone whose attitude, effort, teachability, and humility have helped to make coaching the teams she plays on a pleasure and not a chore. Makenzie thank you for all you have given to Habersham Volleyball – we love you very much, and we will miss you, but we look forward to seeing all the great things God is going to do with your life. 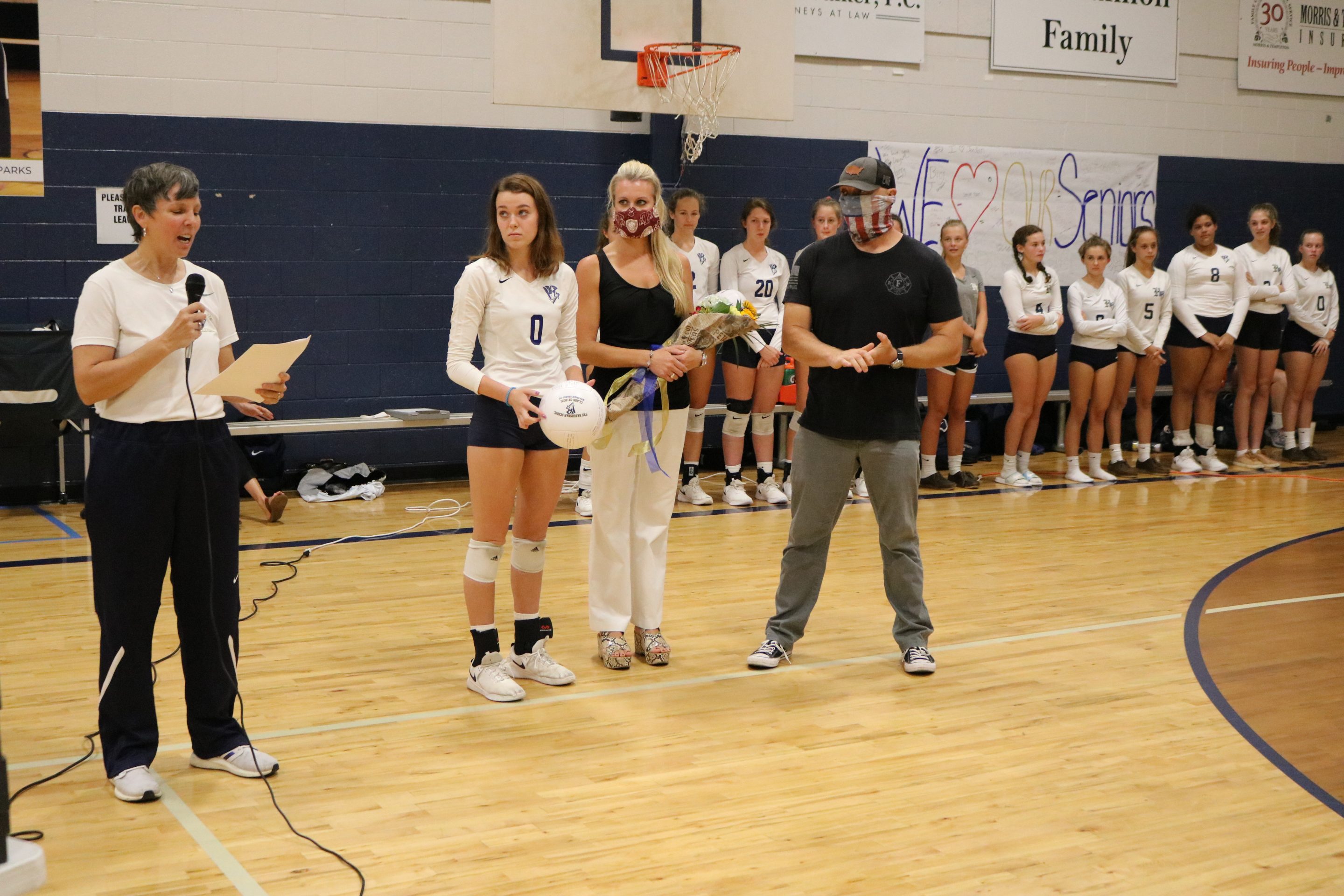 She was a setter. She set for us; she set for club and she had aspirations of setting in college and had already received interest from some colleges for her setting. Half-way through her freshman year, I asked her to switch to outside hitter because I thought it would help make us a better team. She could have said No. She could have been more concerned with her future plans than her current team and looked at this as endangering those plans. She could have transferred to another school that would have used her as a setter. Instead, she said, I’ll do whatever is best for the team. Now, as a senior, she has developed into one of the best outside hitters in Savannah and she has been pursued by Division I college teams and has committed to play for D I Georgia Southern as an outside hitter. Pause and ask yourself, “What would have happened if she had been selfish?” Now, when we put the needs and wants of others before our own, things don’t always work out this dramatically – sometimes the results aren’t even talked about much but, in God’s good and gracious plan, what ALWAYS happens is that we are changed as individuals. We are grown; We become better people when we discipline ourselves in this way and Jordan has shown that kind of growth in her life.

In addition, to date, she has amassed 334 Aces, 606 Digs, and 233 assists and 1,405 kills. She is a 2-time All-Region, All-State, All-Star, and All-Greater Savannah player; a 2-time state champion and will graduate as Habersham’s all-time leader in kills. Jordan, it has been a pleasure to watch you grow as a player and as a person. Thank you for all you have given to Habersham Volleyball – we love you very much, and we will miss you, but we look forward to seeing all the great things God is going to do with your life. 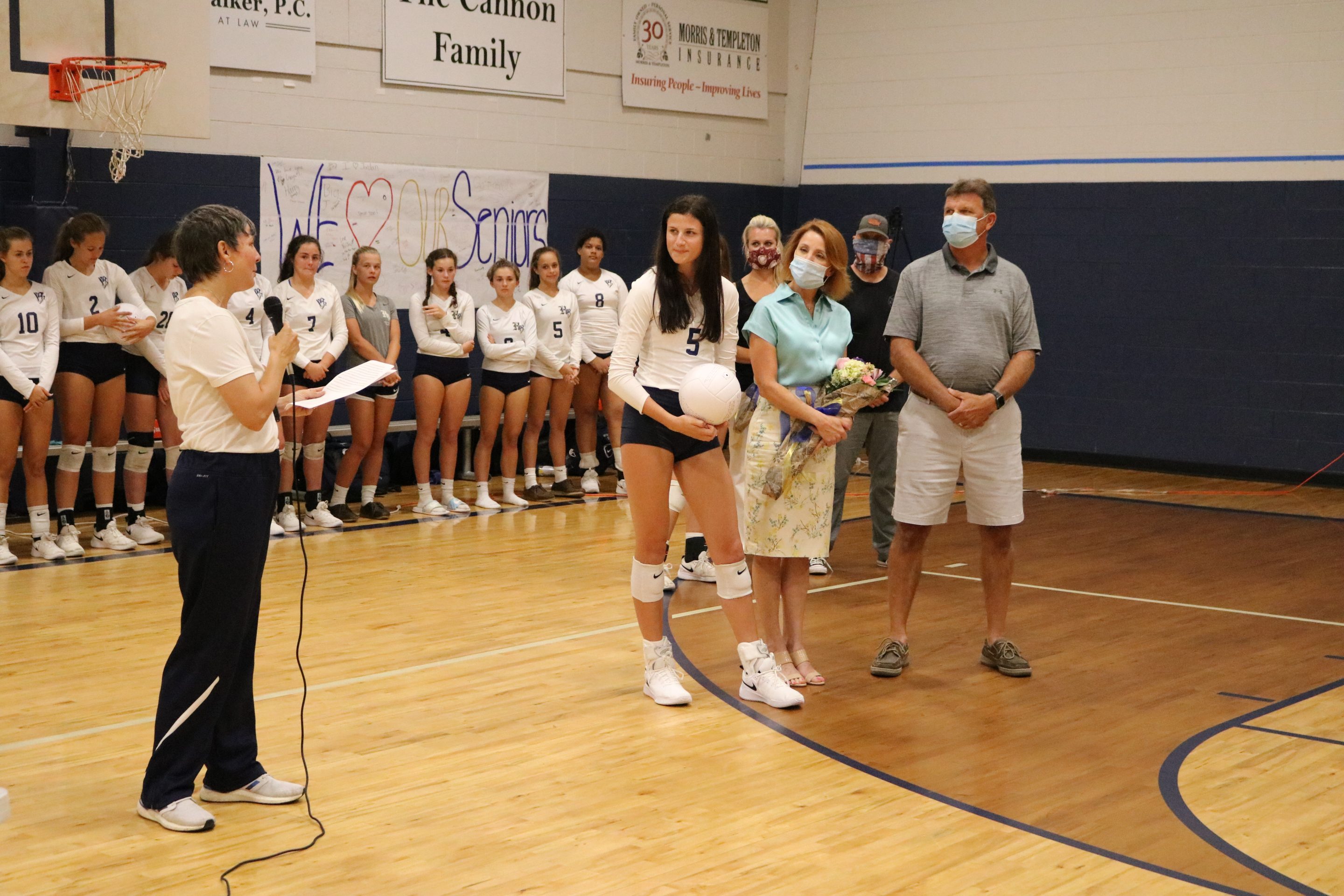 When I think of Peyton Burnsed, I think of Determination. I still remember one of her first matches on the varsity team – she was a very small 7th grader (maybe 4’10?) playing libero in a match against Richmond Hill High School. They had a strong outside hitter that year named Chloe Allen, and shortly after Pey entered the game, Chloe went up to attack the ball with a hard cross-court hit that sounded like it would land for a kill. But there was Peyton. This tiny little girl who read the play, put herself in position, stood her ground, and after the loud “boom” of the hit there was an equally loud “boom” as Peyton dug the ball – there would be no kill for Chloe on that play and no point for Richmond Hill. Peyton Burnsed wouldn’t allow it. Everyone in the stands was shocked that this tiny little girl didn’t break in two. They were even more shocked when they watched her go back to serve. The cute little girl was serving bullets over the net that they were scrambling to pass. It takes an amazing amount of determination to stand there younger and smaller in stature than everyone else on the court and all the while refusing to back down. But that is Peyton. It is that determination and effort that have led her to amass 399 aces, 172 assists, and 1,248 digs so far in her career. It has led her to be a 2-time All-Region, All-State, All-star, and All-Greater Savannah Honorable Mention player; a 2-time state champion, and the Habersham school’s all-time leader in digs.

And Peyton, I want to tell you now, in front of everyone, that over the years we all know I have been urging you to talk more, talk louder, be vocal, and, to your credit, you have forced yourself to become a talker – you can really hear your voice now in matches and it is so encouraging. But I need to say, that the great irony of it all struck me the other day as I realized that, in terms of effort and grit and hustle, you, Peyton Burnsed, may have been one of the loudest players I have ever coached. Thank you for all you have given to Habersham Volleyball – we love you very much, and we will miss you, but we look forward to seeing all the great things God is going to do with your life. 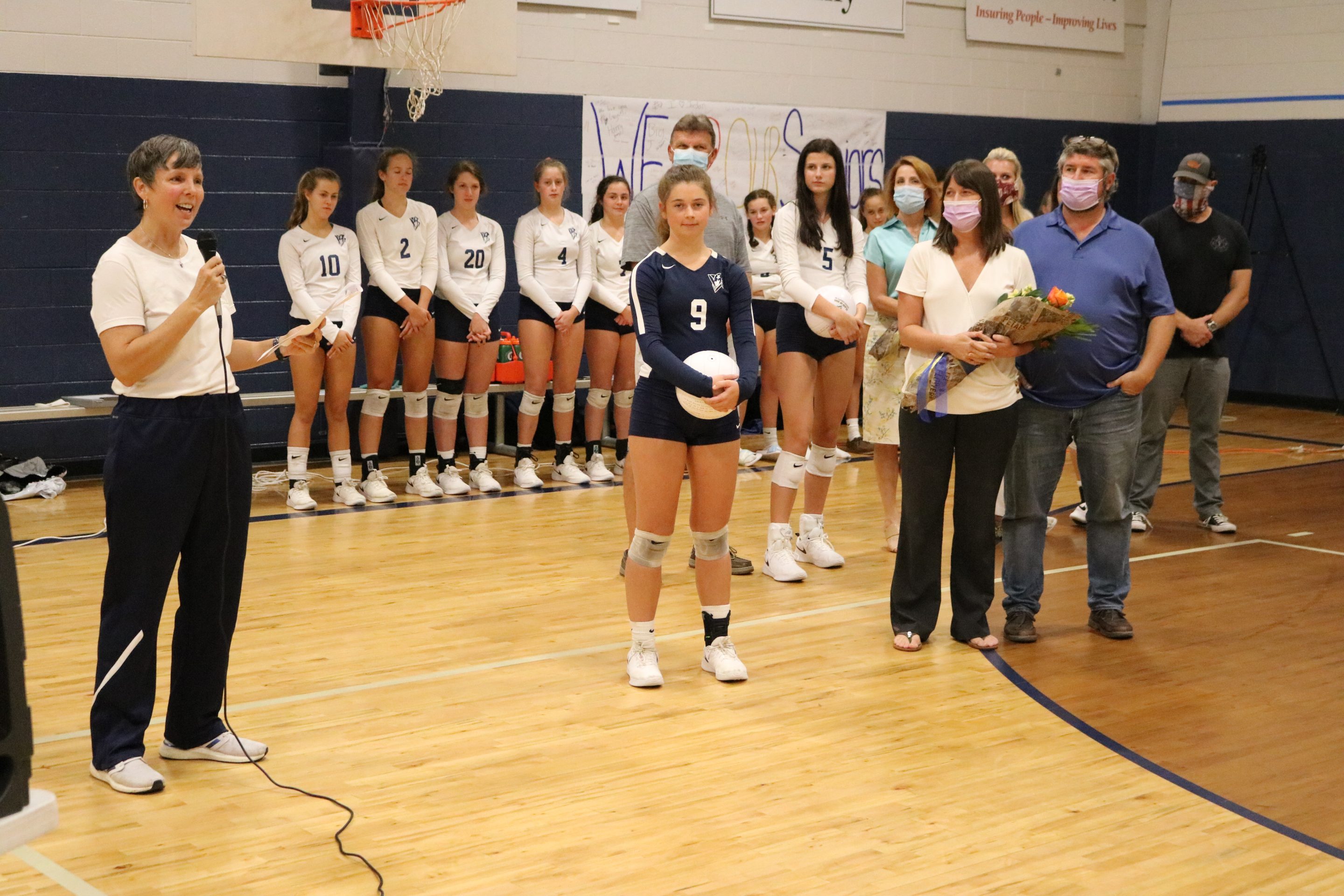 Before I finish, now that all of the seniors are out here, I want to say something about the 3 of them. In addition to the well-deserved accolades they have earned and accomplishments they have achieved, each of these girls has also made a concerted effort to give back. On several occasions they have come to JV practices to help them get better by serving at them, working with them one on one, and even leading a practice for me. They have set a wonderful example of how older, more experienced players can give a little bit of time and help make younger players better but even more so, help them feel like they matter. These seniors have taken time to encourage and teach and for that, I am so proud and so grateful.

And lastly, let me say that there is a reason they do this. And the reasons are standing beside them on this court right now. Their parents have been so supportive and so giving during their time at Habersham. From keeping the book every match for 7 years to line judging to organizing food for out of town tournaments to countless other ways they have given behind the scenes that no one but me will know about – they have encouraged and helped our team and me personally and I want to take this moment to say to Lea and Scott, to Robbie and Jennifer and to Glenn and Traci, thank you so very very much. You have been a blessing to me, and to our team and I appreciate you more than I can say.